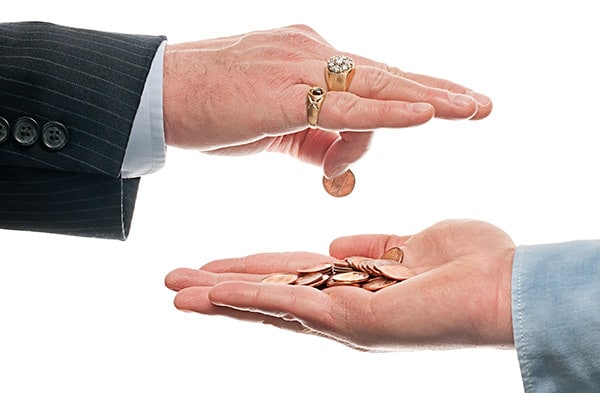 The federal minimum wage of $7.25 has not changed since 2009, but since 2017, the minimum wage in California has been rising every year, and roughly 20 other states across the country are now following suit. These increases have been brought about by newly enacted state legislature and by state residents voting for increases in local minimum wage around the country.

As of January 1st, 2020, companies in California that have 25 or fewer employees must pay a minimum wage of $12.00/hour while companies with more than 25 employees must now pay a minimum of $13.00/hour. The upward trend will continue every year until January of 2023 where all employees across the state have to be paid at least 15.00/hour.

Different areas of California have an even higher minimum wage for businesses of different sizes. For example, the minimum wage in Los Angeles is up to $13.25/hour and the San Francisco minimum wage is up to $15.59/hour. The charts below give you an idea of the variation of minimum wage laws in various counties around the state.

From 2017 to 2023, California has a schedule of when they plan to increase the minimum wages for companies of different sizes. This is what the schedule is currently looking like:

Exceptions to the Minimum Wage Law in California

Not all employees are subject to the minimum wage law, but the salary for exempt employees must be a fixed & guaranteed amount. When it comes to proving that an employee is exempt, the employer is the one who is responsible for providing evidence of this.

Groups that are exempt from this law include parents, spouses, or children of the employer, external sales teams, and indentured apprentices legally allowed under the State Division of Apprenticeship Standards. Under Labor codes 1191 & 1191.5, employees who have a mental or physical disability, or companies that employ disabled workers, a special license must be issued by California’s Division of Labor Standards Enforcement authorizing that an employee can work for less than the state’s minimum wage.

Employees who receive tips are also subject to a different minimum wage that is determined by the state. For example, tipped workers earn only $2.35/hour in New Mexico, $9/hour in Arizona, and $8.98/hour in Colorado.

There is also a specific rule for learners, or those who have no previous work experience of a similar nature, that they must be paid at least 85% of the minimum wage during their first 160 hours of work.

For an employee in California to be able to be considered exempt, they must meet specific requirements set by the state. These include:

Can Employees for Less Than the Minimum Wage Willingly?

What Happens When an Employer Pays Less Than the Minimum Wage?

If an employer is not willing to pay their employees the minimum wage required by the law, then the employee(s) can file a wage claim with the Labor Commissioner’s Office, or they can file a lawsuit against the employer to recover lost earnings. When a wage claim is filed, the case is investigated by a local division of the Labor office which will then culminate in a hearing or a dismissal of the claim. The entire process can be appealed by either party, leading to a court trial where both sides can present evidence & witnesses, but the case cannot be decided on the basis of testimony & evidence alone.

If an employer refuses to pay after the court determines that they were in the wrong, then a judgment can be passed by the Division of Labor Standards Enforcement to collect what is owed from them. Furthermore, if an employer chooses to retaliate after an employee files such a suit over lost earnings, a different type of lawsuit based on employer discrimination or retaliation can be filed against the employer.

Do Tips Count Towards Minimum Wage?

Tips do not count toward the minimum wage and it is illegal for an employer to count tips as part of their obligation to pay an employee’s minimum wage.

Is There Any Difference Between Minimum Wage for Minors or Adults?

Whether an employee is a minor or adult, they are all subject to the same federal and state minimum wage laws unless they fit a specific exception.

Which Other States are Increasing Their Minimum Wage This Year?

Other states in the process of increasing their minimum wage include:

If you’re looking for more information about California’s employment laws such as minimum wage, get in touch with a seasoned employment law attorney who can help guide you in the right direction. Contact us today at 1-833-225-5454 or [email protected] for a free case evaluation with Heidari Law Group in Los Angeles, Irvine, or Sacramento.