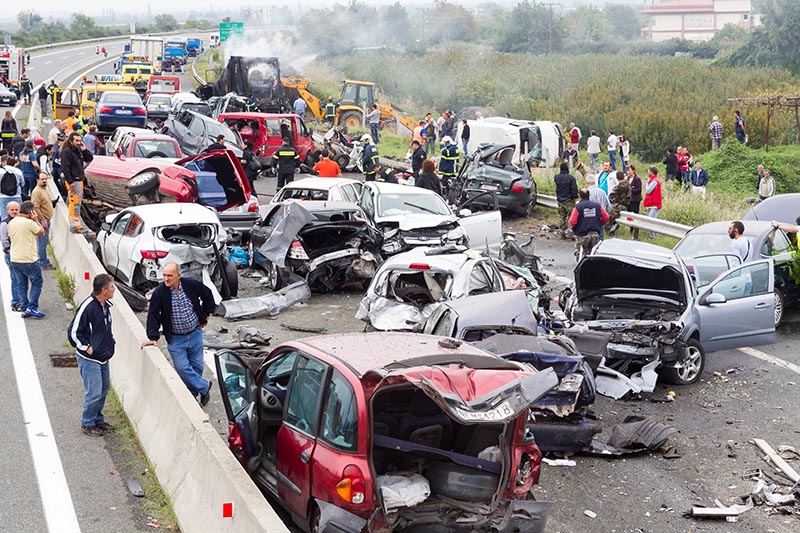 According to the Insurance Institute for Highway Safety, in 2019, 57% of car occupants experienced fatalities in multiple vehicle accidents when hit from the front. In 2019, 39% of car occupant fatalities occurred in single-vehicle car accidents, and 61% of car occupant fatalities occurred in multiple vehicle crashes. Multiple vehicle crashes are considered to be the most dangerous car accident situations to be in. Along with resulting in severe injuries, it also has many legal complications as parties try to figure out who is at fault. It is essential to hire an experienced car accident attorney to better determine the situation and look into the case to determine which party is in fact liable. For more information on what to do after car accident has just occurred, please visit our page here.

What is a Multiple Vehicle Crash?

A multiple vehicle crash occurs when there are several automobiles that have been involved in a single car accident. Usually, a multiple-vehicle crash includes three or more vehicles. Many think that car accidents involve only two cars. But, when three or more cars are involved, the injuries are usually more severe.

For example, this occurs when one party rear ends another party and another car coming along on the highway does not see the accident and crashes into the two cars. Multiple vehicle crashes are most common in overly populated states and cities, such as Los Angeles and Las Vegas. For example, the 405 freeway in California is one of the busiest freeways in the entire country. With the sudden stop of traffic at random points on the freeway, drivers on that freeway are more likely to end up into a multiple vehicle accident.

A most common scenario of a multiple car accident is a rear-end accident. This occurs when one car rear ends another and another car from behind does not see the accident. They then rear end that second car. This is also considered a “pile up” or a “chain-reaction accident” when it occurs on the freeway.

Who is at Fault in a Multiple Car Accident?

It is not simple to determine who’s at fault in a multiple car accident. It depends on a case-by-case basis. Parties during litigation will look into the conduct of each party involved in the accident. The fault is determined on whether the car accident was a rear-end accident, a head-on accident, or an intersection accident.  For more information on different types of accidents and the damages a plaintiff could collect, please visit our page here.

Usually, in rear-end accidents the party that is ultimately all the way in the back is liable for the rear-end car accident. The person all the way in the back had the opportunity to swerve away from the accident but didn’t and crashed into the multiple cars. This type of driving could be considered negligence, and plaintiff could bring a negligence claim against them. For more information on negligence claims, please visit our page here.

Could All Drivers Be at Fault in a Multiple Car Accident?

It is possible for all drivers to be found at fault in a multiple car accident. For example, in a three-way collision that has resulted from a three-way street, most likely all three-way drivers will be at fault, unless there are other circumstances that may affect the situation. Factors that could affect the situation include, but are not limited to:

Car accidents are very complex situations, and could result in several different legal claims. It is important to seek legal assistance from an experienced car accident attorney to better determine your liability and work to recover damages from the other parties. Especially when dealing with insurance companies, car accident claims can be very difficult to maneuver through. Our experienced car accident attorneys in Los Angeles will work to take the stress out of the legal process and make sure you receive just compensation.

Call us today for a free consultation. At your consultation, we will determine who was at fault in the multiple party car accident, and what steps we can take to assert your legal claim. We work on a contingency fee basis, which basically means that you will not have to pay a fee until we win your case or get a settlement in your favor.